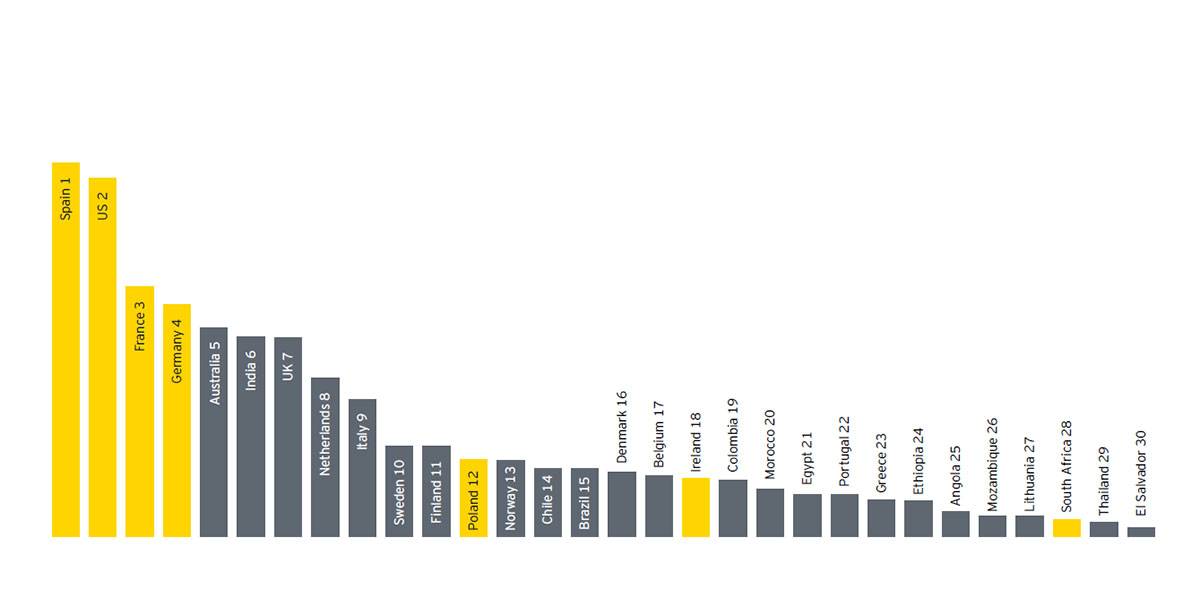 Spain, the USA, France and Germany are at the top of EY’s new PPA index

Spain, the US, France and Germany are leading Ernst & Young Global’s (EY) new index of the top 30 markets with the highest corporate PPA growth potential.

The global consulting company released its first Corporate PPA Index with the 58th edition of its Renewable Energy Country Attractiveness Index (RECAI). It says there that corporate power purchase agreements are definitely emerging as a key driver of green energy capacity additions.

Spain occupies the number-one position with a booming PPA market. Provided that regulatory uncertainties remain under control for new-build projects, the country is expected to be the hottest market for growth as the destination of choice for pan-European virtual PPAs, EY said.

The US was the largest PPA market in 2020, but there has been a slow down. It ranked second in the PPA Index.

France and Germany are third and fourth, as EY expects significant corporate PPA growth there over the next five years, despite a slower start. Government auctions offering stable subsidies and relatively low wholesale market prices have so far limited local PPA growth, but there is also significant demand for renewables from corporations.

EY paid special attention to three other markets down the ranking. Poland, at 12th position, is forecast to “climb rapidly” in future indexes. It is the largest renewables market in Eastern Europe, with one of the most expensive and “carbon-dirtiest” grids. The regulatory obstacles that have hindered growth in the local corporate PPA market are now being overcome.

Ireland landed on the 18th spot in the first PPA Index by EY. There are just a few corporate deals for green energy in the Irish market for now, but large multinational companies are waking up to the opportunity, helped by the delayed Renewable Electricity Support Scheme (RESS) auction process and relatively high wholesale prices. Ireland has set a 15% goal of renewable electricity to be sourced through corporate PPAs by 2030.

South Africa, currently ranking 28th, is moving from a coal-heavy grid to renewables and has the potential to become a new corporate PPA hot spot, according to EY. For now, however, large companies there are mainly focused on energy security, betting on on-site or adjacent projects to save on high grid-wheeling costs.

RE-Source Southeast Hub is a regional platform for cooperation between renewable energy producers and energy consumers.